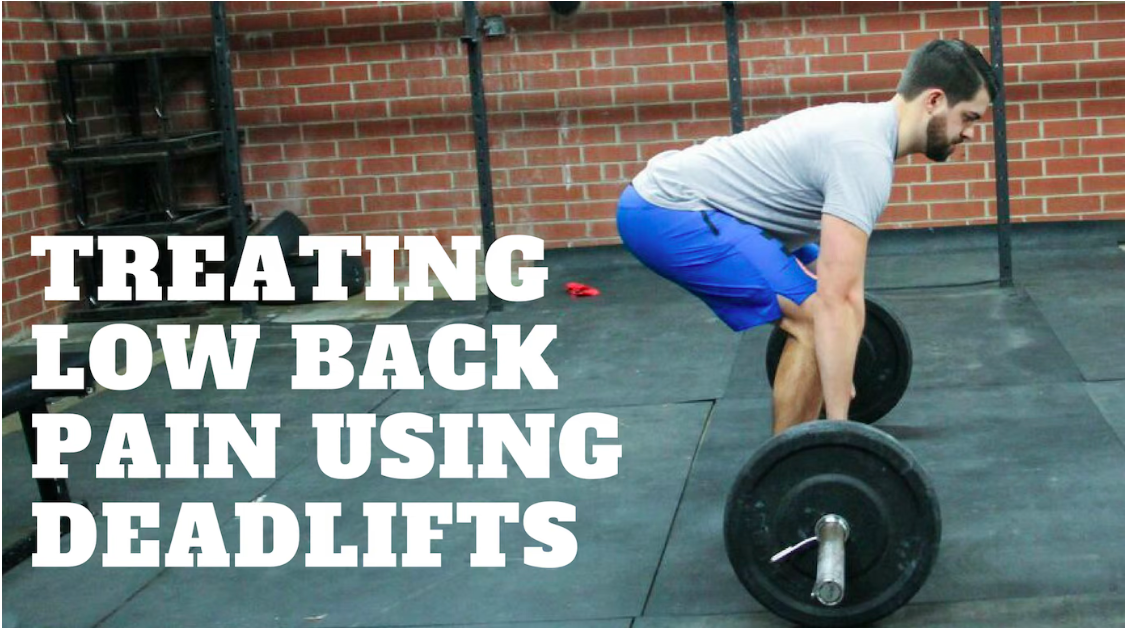 Deadlifts are unfortunately all too commonly believed to be unsafe exercises for an individual’s low back health. But the research says quite the opposite of what many believe. Crazy right? An exercise known to help make your back and hips STRONGER might also make it HEALTHIER!!! Let’s dive into the research on deadlifts for low back pain.

Yes. Incredibly safe especially when performed with good technique and at proper loads for that individual.

They are even safe in populations we don’t typically think that heavy loading is good for such as older adults with osteopenia and osteoporosis (Liftmor 2019 trials).

What Does the Research Say About Deadlifts for Low Back Pain? 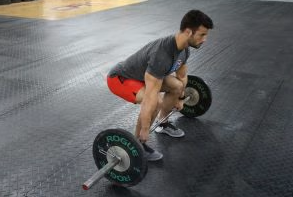 Let’s discuss 4 of the many studies utilizing deadlifts in individuals suffering from low back pain.

I wasn’t kidding about the aggressiveness of their protocol! Despite being probably over-aggressive on their loading with a population that we don’t typically see very good outcomes with, 2 of the 3 participants saw significant improvements in their pain.

Please note that this isn’t the protocol I’d suggest but the research here was too interesting to not discuss.

Next, Welch et al. published a study looking at the effects of a 16-week free-weight resistance training routine. All of their patients had lower back pain for greater than three months in duration. They included a lot of exercises we would traditionally see in strength & conditioning programs (and much less frequently seen in physical therapy and chiropractic clinics) such as deadlifts, goblet squats, lunges, planks, and step-ups.

They also had individuals lifting loads between their 6 and 10 rep maxes. YES!!! No 2lb ankle weight leg lifts, useless clamshells, or TA activation work. Any psychological beliefs around pain were also addressed in this study (for more on this, visit Ice.Physio Comprehensive Pain Management Course)

So what did they find? Significant improvements in fatty infiltrate of the lumbar muscles, a 72% decrease in pain scoring, 76% improves in disability measurements, and increases in quality of life assessments!

A second study (published in two parts) further expanded on the use of deadlifts for low back pain treatment. Asa 2015 took patients with greater than three months of mechanic low back pain. Subjects were then split into two groups. One group did eight weeks of deadlift training. The other group did low load motor control exercises designed to specifically target the impairments of the individuals. After the intervention, both groups had significant decreases in pain intensity and increases in strength & muscle endurance measurements.

The only statistically significant difference between groups was in their Patient-Specific Functional Scale, which favored the low load group. But how surprising is this given that their rehab plan specifically targeted the individual’s impairments? This study makes me curious about what the research says would happen if we combine individualized motor control exercises with deadlifts.

According to their analysis, patients with lower intensity of pain (<60mm on the pain VAS) and with better lumbar spine endurance (>60 seconds on the Biering-Sorensen Test) had greater improvements with a deadlift based rehab program than those not meeting those criteria. 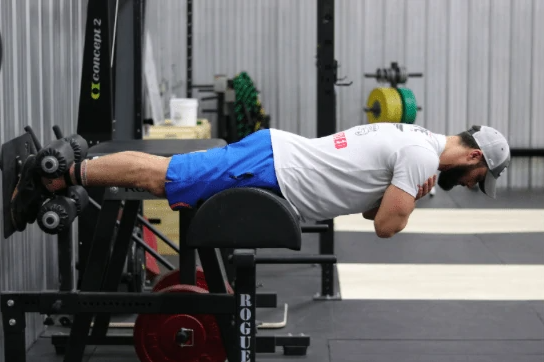 For those unfamiliar with the Biering-Sorensen Test, a modified version can easily be performed in most gyms using a glute-ham developer. Position the GHD so that the pad is on the ASIS (anterior superior iliac spine) with the feet locked into the holder. The athlete then holds their body out with the trunk in neutral alignment for as long as possible. The test is terminated when the subject becomes excessively fatigues or when neutral trunk alignment is no longer maintained. Previous research has shown this test to be reliable in identifying individuals with low back pain.

Here is a great summary from Scot Morrison of PhysioPraxis 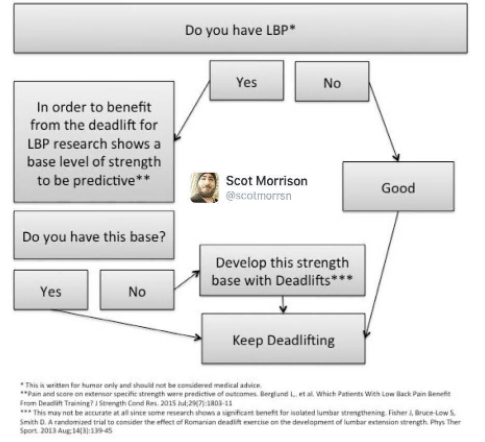 How Do I Start Incorporating Deadlifts In My Rehab Plans?

I understand that for many clinicians, implementing deadlifts into a patient’s plan of care is something they don’t have much experience in. Maybe they’ve never deadlifted themselves or just don’t know how to start. But we know from research that exercises such as those we commonly use on stability balls don’t do enough to strengthen our patients (Nuzzo).

If your review of the above studies has convinced you that you need to start, then I first suggest you work with a coach or clinician very familiar with the lift. Use their guidance to improve your technique and teach you basic loading principles.

A full technical breakdown of the deadlift is not my goal with this article, but I will share a few tips. First, here are the main points of performance we use in our Clinical Management of the Fitness Athlete course work. These classes are designed to make clinicians great at managing the needs of fitness athletes and the population as a whole: 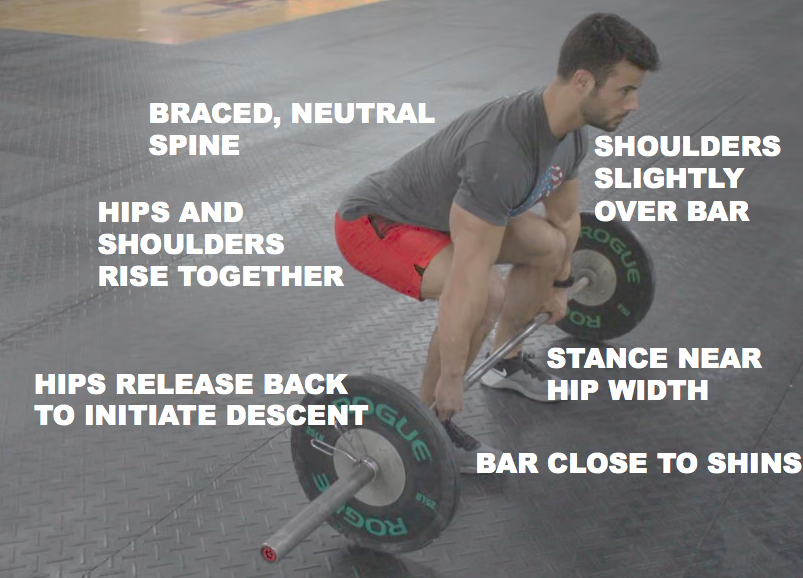 Common Deadlift Faults to Watch For

I’ve written about deadlift faults in this article. But the two common faults I think are particularly useful for clinicians to look at are around bath path.

First, do the knees move out of the way or the barbell (creating a vertical or slightly posterior bar path), or does the barbell have to move around the knees? The below video (using the “Iron Path” app) does a great job of demonstrating this. If the bar has to more around the knees, we have a pretty inefficient technique and also put a little extra load through the low back.

For these athletes spending time educating and working on improving set up positioning and their first pull will help them out tremendously.

The second bar path fault we commonly see is letting the barbell drift away from the body after it passes the knees (left picture). What we ideally want to see is the lats pulling the bar back to the hip, keeping it close to (or sliding up) the thigh to the hip. 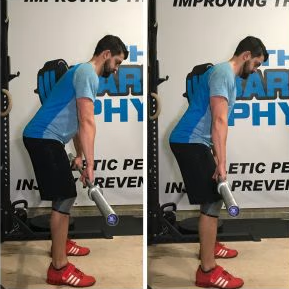 Think about it this way….when carrying groceries, we don’t hold them far out in front of our body, we hold them close to our thigh. Letting the barbell drift is the same. It unnecessarily increases the moment arm around the hip joint.

To fix this, cueing plus the following exercise makes a great combination.

Bracing for the Deadlift

I know bracing questions will come up, and again, my goal here is to not hit every detail about the deadlift technique, I will reference this article on bracing for those interested.